History of the AAM

In 1974, the Dallas African American Museum was founded on the campus of Bishop College. The original name of the Museum was the “Southwest Research Center and Museum of African-American Life and Culture.” The founding director of the Museum is Dr. Harry Robinson. Dr. Robinson was born in New Orleans, Louisiana. He grew up in rural Louisiana, attended and earned his Bachelor’s degree from Southern University in Baton Rouge. He earned his graduate degrees from Atlanta University and the University of Illinois at Champaign-Urbana. As of 2021, Dr. Robinson has served as the Museum’s only director and chief executive officer.

After its founding, the Museum developed and sponsored programs and activities that highlighted its mission. It sponsored African and African-American art exhibitions, a lecture series named in honor of Bishop College’s first African-American president Joseph J. Rhoads, and a biennial Texas women’s conference that was eventually named for Dallas journalist and local historian Dickie Foster. The Museum opened in a small 30’ x 30’room on the second floor of Bishop College’s Zale Library, for which Dr. Robinson also served as the chief librarian. Although Dr. Robinson eventually moved the Museum to the basement of the Zale Library, it had limited exhibition space. Nevertheless, it exhibited the works of local African-American artists, sponsored a variety of programs for youth and adults, and served as a centerpiece for Bishop College’s community outreach efforts and programs. After its opening, the Museum received major donations of African art from Mr. and Mrs. Stanley Marcus, Mr. and Mrs. George Perutz, and the Meadows Foundation.

In 1979, the Museum shortened its name to the Museum of African-American Life and Culture and it became independent of Bishop College. Bishop College’s ongoing financial crisis forced the separation. The Museum created an independent, nonprofit governance organization called the Foundation of African-American Art. Although the Museum separated from Bishop College, it was still housed on its campus in the Zale Library. In its efforts to increase its exhibition space and program facilities, in 1981 the Museum embarked on a capital campaign to renovate a chapel on the Bishop College campus. The campaign was not successful. Despite a series of community programs designed to raise funds, a grant from the National Institute of Museum Services, and a challenge grant of $75,000 from the Meadows Foundation, the Museum raised only $325,000. But it needed $800,000 to begin the renovation project. 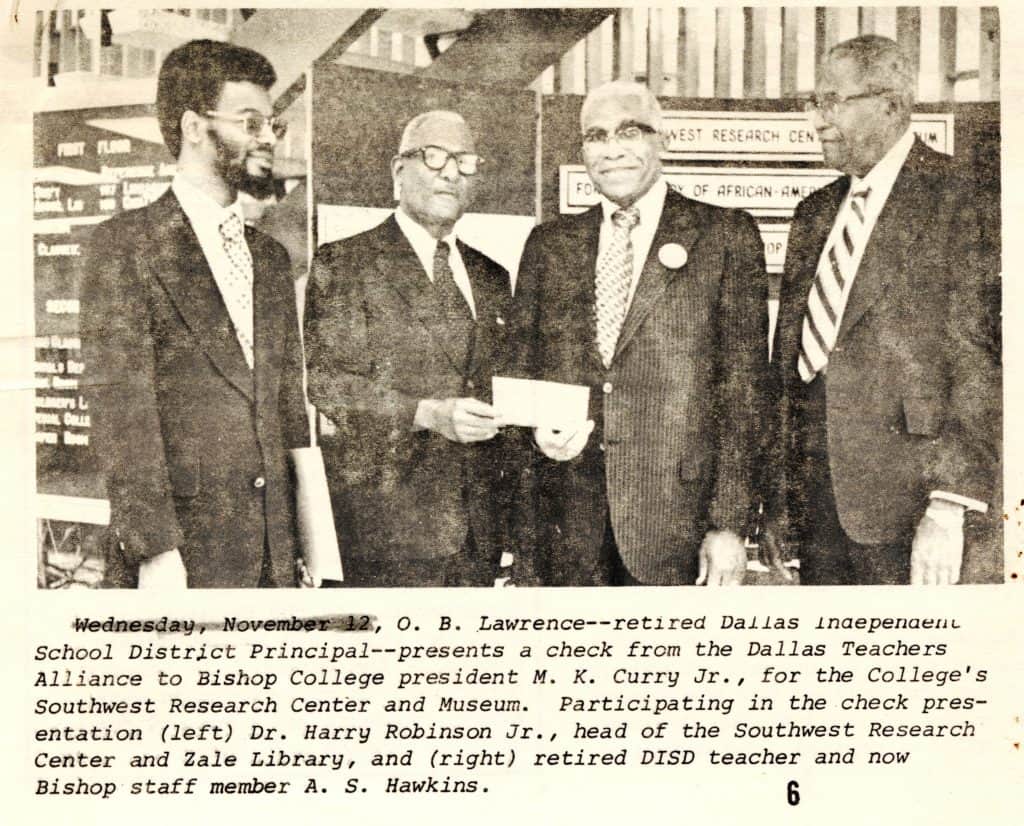 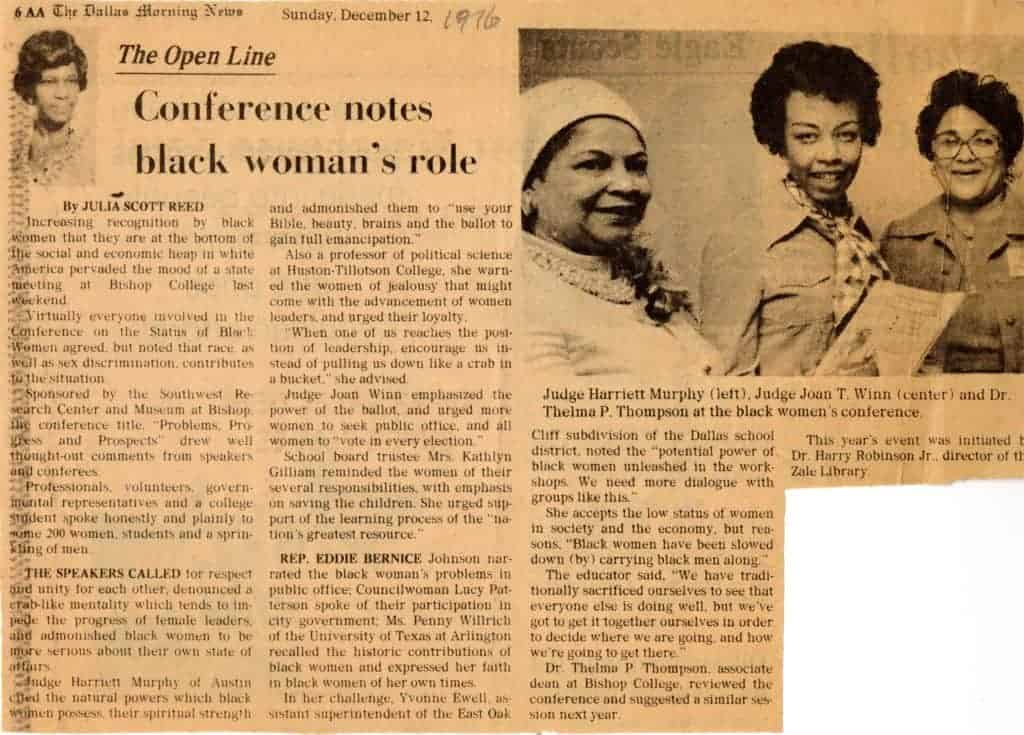 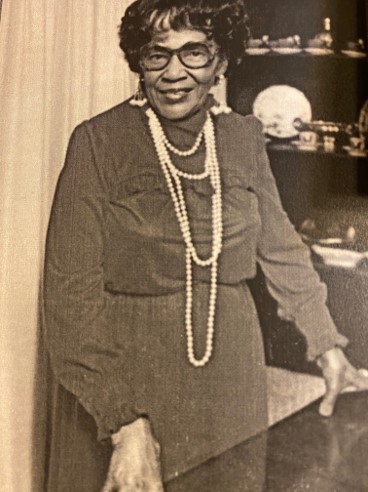 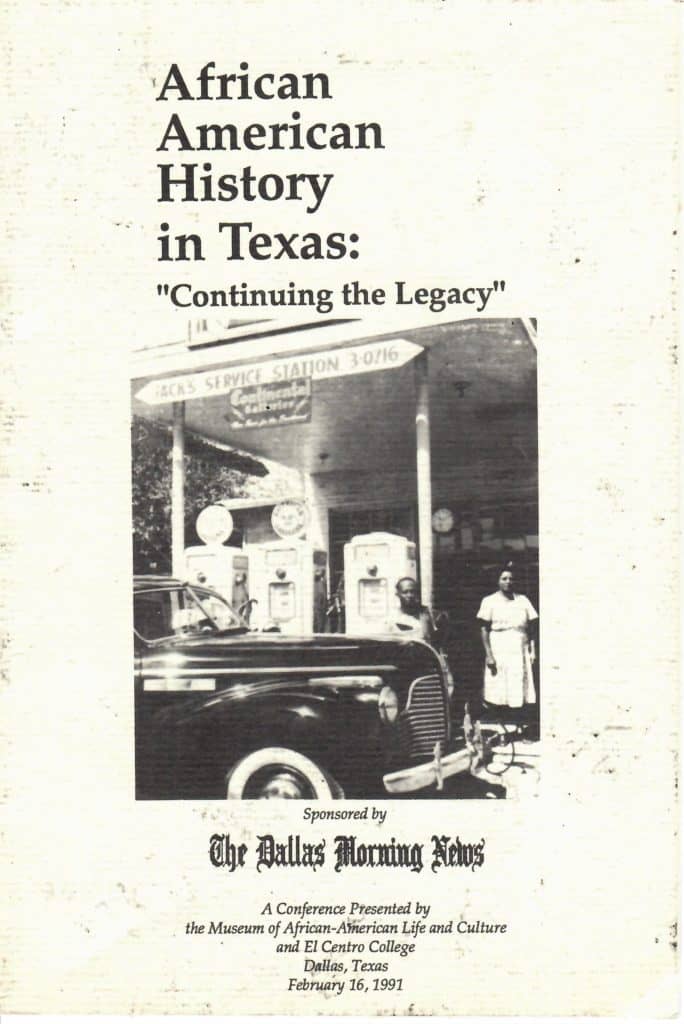 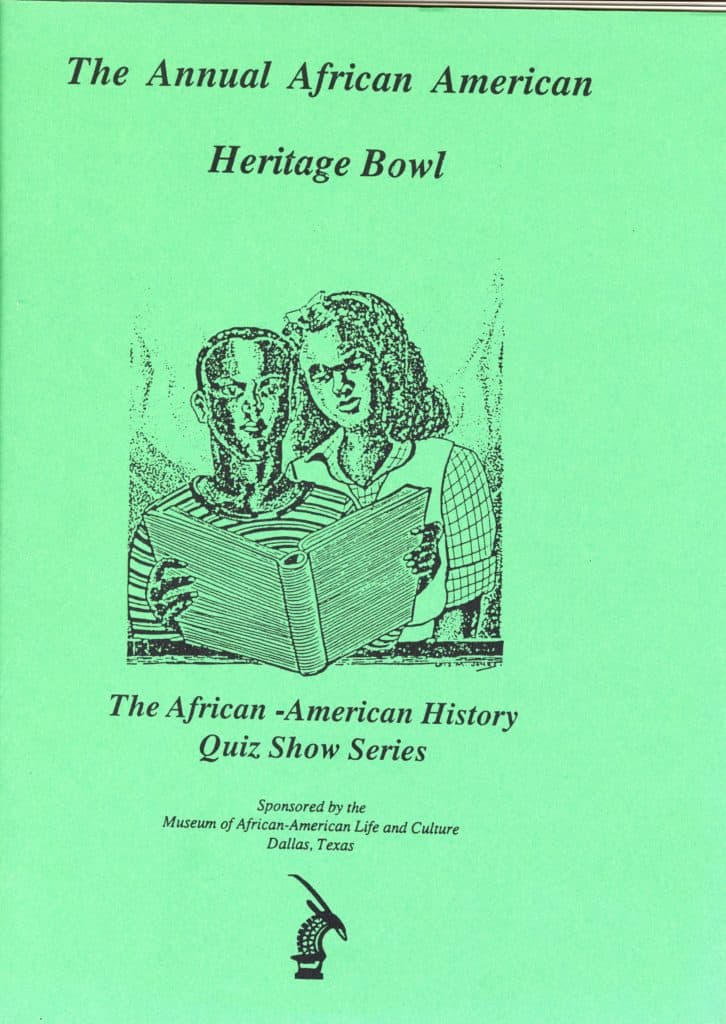 Bishop College declared bankruptcy in 1988, and the Museum moved its offices to Dallas Fair Park. Its temporary location was in the Magnolia Lounge, a building that also housed the Fair Park Information Center. By using offsite galleries and exhibition sites and auditoriums in the city, such as the Dallas Public Library, the Hall of State, El Centro College, and the Trammell Crow Center, the Museum continued to sponsor a plethora of exhibitions and educational and community outreach programs. Some of its major exhibitions included “Black Presence in Dallas: A History of Black Political Activism in Dallas County, 1936-1986” (1987); “Sacred Symbols: Animals of Pharaoh’s Egypt” (1989); and “Juneteenth: 125 Years Later” (1990). Its programs included: the biennial A. Maceo Smith Brunch, the annual Texas Black Invitational Rodeo, the Southwest Black Art Exhibition, Community African-American History courses, Summer African-American History camps, an annual African-American Heritage Bowl for high school and middle school students, and an African-American History Fair. During its 15th anniversary in 1989-1990, the Museum sponsored the first statewide African-American History in Texas conference, the Arco Lectures Series, and a concert by the Boys Choir of Harlem.

During the year of its 15th anniversary the Museum also celebrated another major milestone: on November 4, 1989, Dr. Robinson, the Museum’s board of directors, and a host of dignitaries, including Dallas Mayor Annette Strauss, broke ground in Fair Park for the Museum’s new building. In 1985, even before the closing of Bishop College, Dr. Robinson had begun an effort to build a new building for the Museum in Fair Park. After discussions with Harry Parker, the director of the Dallas Museum of Art, the two of them negotiated with the Dallas Park Board, the Friends of Fair Park Association, and other stakeholders to move the Museum to Fair Park. The negotiations included providing partial funding for the Museum’s new building from a 1985 city bond issue to upgrade Fair Park and other arts institutions in the city. The bond issue passed and the Museum received $1.2 million to build a new $3 million building in Fair Park. After four years of fund raising, including major donations and contributions from the Meadows Foundation, Nationsbank, Exxon, and over 50,000 individual donors, the Museum broke ground for its new building in 1989. But, due to the rising costs for construction which eventually amounted to $4.6 million, the Museum’s 38,000-square foot building did not open until November 13, 1993.

The opening of the new building provided Dr. Robinson and the Museum staff a variety of new opportunities for exhibitions and programs. To acknowledge and emphasize the new phase in the Museum’s history, the board of directors shortened its name to the “African American Museum.” The new building provided space for the Museum’s most important archival and art collections and a venue to open them for viewing by the public and use by scholars. The Museum has specialized in collecting and exhibiting African-American Folk Art. It houses and exhibits a 200-piece collection of folk art named for former Dallas Park Board chair Billy Allen (the Billy Folk Art Collection). The Museum also has the following major collections: the Sepia Magazine Photograph Archives, the Dallas County Black Political Archives, the Bishop College Archives, the Texas Black Women’s History Archives, the Freedman’s Cemetery Collection, and the A. Maceo Smith Collection. It is the official repository for “Black Texana” for the State of Texas, and it houses the Texas Black Sports Hall of Fame. The Museum’s current programs include: monthly “Jazz under the Dome” concerts, an oral history project sponsored by the African American Education Archives and History Program, the annual Tulisoma Black Writers’ Conference, and a Junior Docent Program.

In 2019 the African American Museum celebrated its 45th Anniversary. With widespread community support it has become one of the most successful museums promoting and preserving African American history and culture in the United States. For example, in 2019-2020 the Museum sponsored two widely acclaimed exhibitions: “The Paradox of Liberty: Slavery at Jefferson’s Monticello” and “The Kinsey African American Art and History Collection.” These two exhibitions attracted over 75,000 visitors to the Museum and highlighted the success of the Museum in attracting a diverse audience from the local community as well as people visiting  Dallas from elsewhere.

The African American Museum has also added the Dallas County Education Hall of Fame as a permanent exhibition. This exhibition features outstanding African-American educators from Dallas County as well as those who fought for the desegregation of and improvement of education for children in the county’s public schools.

The African American Museum has also continued to collect the personal papers of people in the local community and artifacts that highlight the African and African-American experience. Currently the Museum holds fifty-eight archival collections and over 200 artifacts. 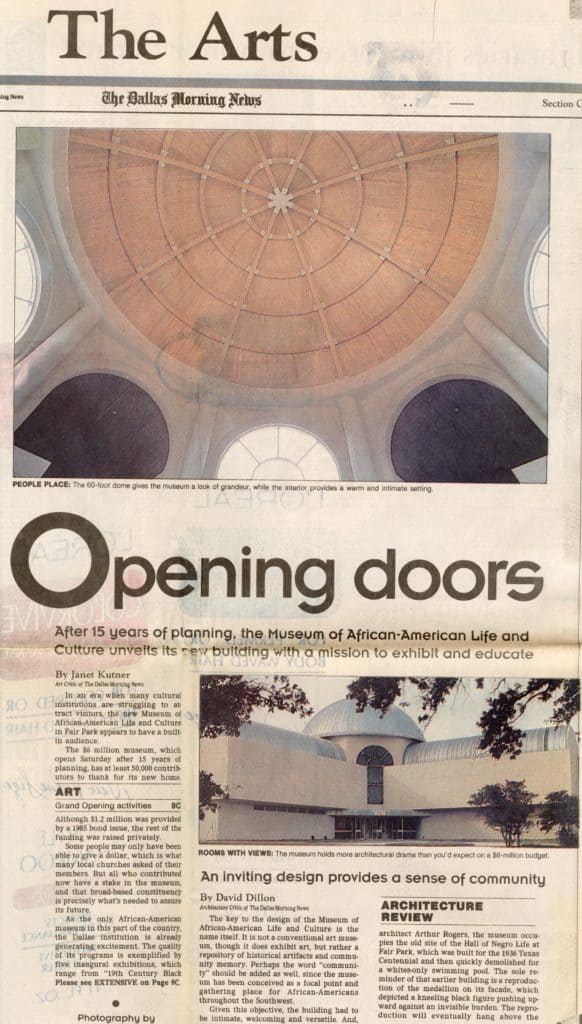 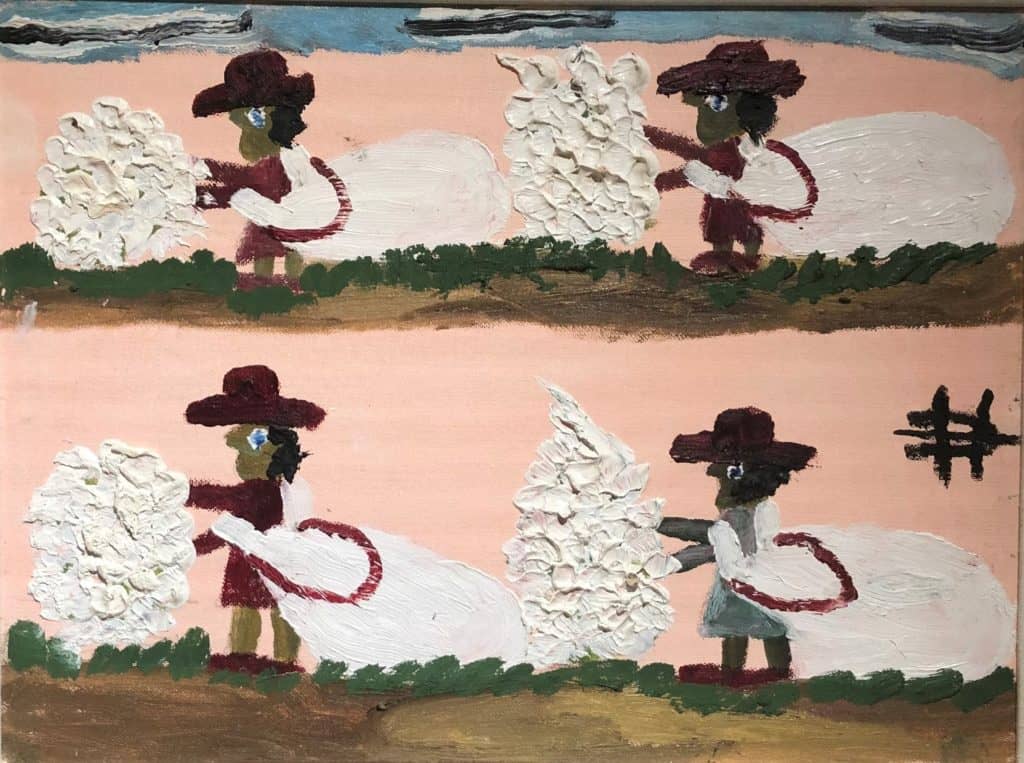 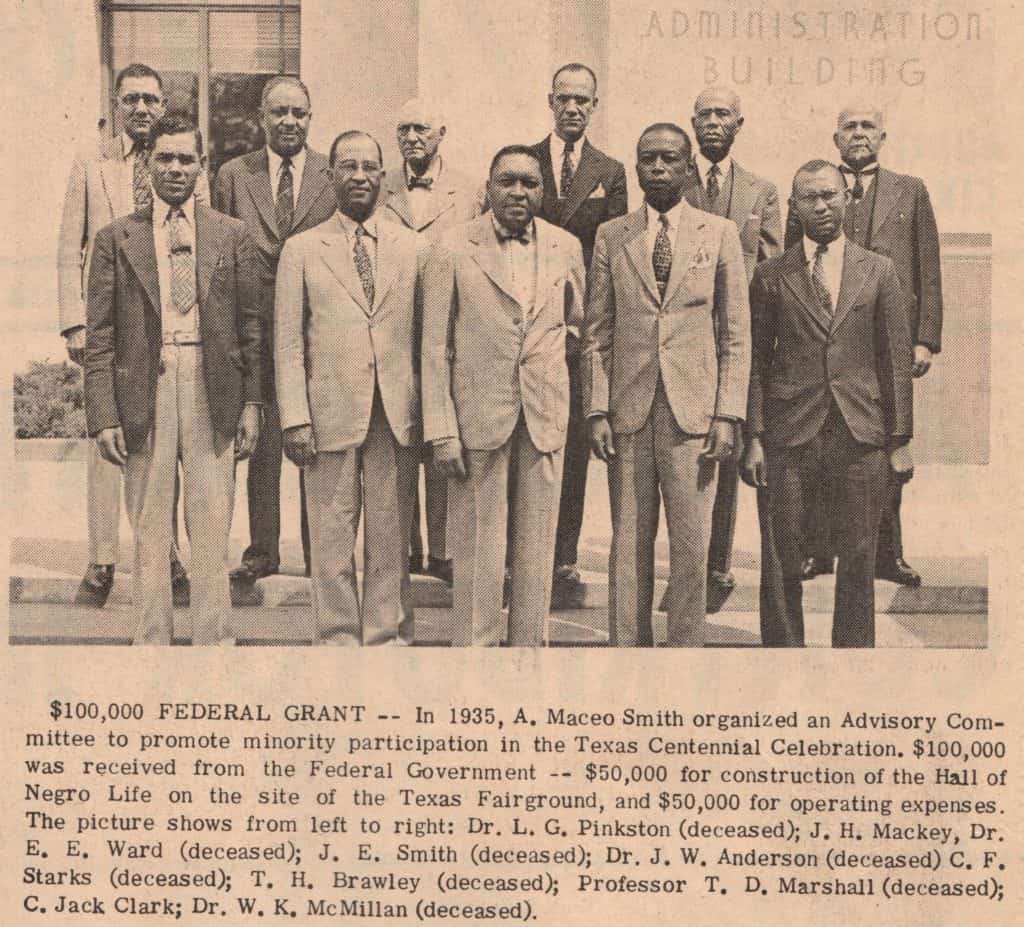 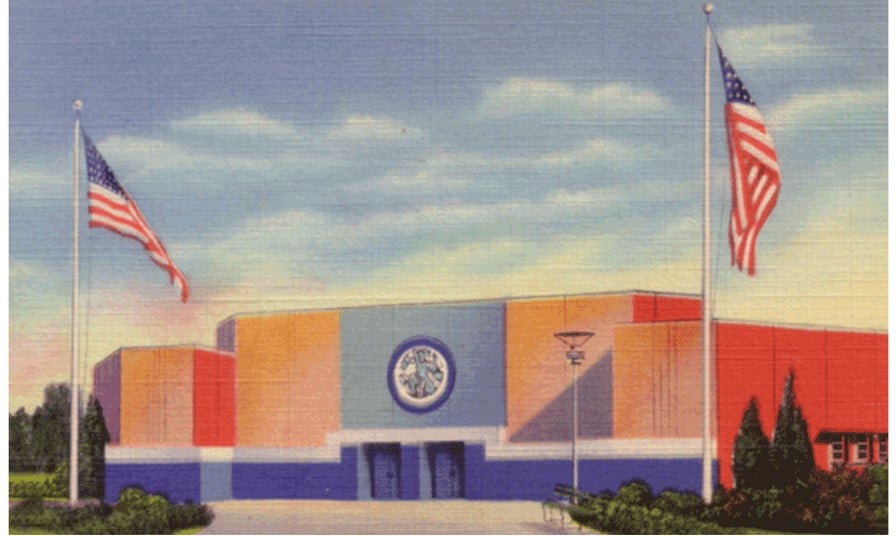 Our first steps as a Museum

In 1974, the African American Museum was founded as a part of the Special Collections at Bishop College (Now Paul Quinn College), a historically black college that closed in 1988. The Museum was housed in the Zale Library.

Our first summer camp for Kids

The Summer Camp started in 1976 while the Museum was still at Bishop College. The Summer Camp has continued until this very day with the next installment beginning every June. Enroll your child here or donate to support a child without the means to attend our marvelous technology, art, and literature camp.

The first gala was 1986 at the Adolphus Hotel Dallas. The number of attendees was 350. The Adolphus Hotel Dallas was built in 1912. “Located at Akard and Commerce, a corner which it shares with the Baker Hotel, the hostelry has the dubious distinction of being part of what the Dallas Chamber of Commerce calls Cornbread Corner”.

Cornbread or not, the Aldophus was filled with legendary luxury. In the old movie version of Bonnie and Clyde, Warren Beatty asks Faye Dunaway, a waitress from West Texas, “Now how you like to go walkin” in the dining room of the Adolphus Hotel in Dallas wearing a nice silk dress and have everybody waiting on you?” Which goes to show that the Adolphus is legendary and nonetheless, the scene of the first gala surrounded in wonderment and fanfare.

Our First Official Museum Home for Life and Culture

In 1988 the Museum moved from the campus of Bishop College to the WRR radio station building in Fair Park. Before this occurrence, the museum was founded in 1974 and since 1979, has operated independently. Later, a 7 million dollar structure which is now its home was funded through private donations and a 1985 Dallas city bond election. The bond election provided 1.2 million towards its construction. The 38,000-square-foot (3,500 m2) structure, built in the shape of a cross, is made of ivory-colored stone. Natural materials and design motifs are used throughout the museum in a manner reminiscent of pre-industrialized cultures of the African continent. Dallas opened this new facility in Historic Fair Park in November 1993

After the move to the new space at Fair Park Dallas, the museum continued their tradition of sending to each member, corporate supporters, and key community supporters an excelent document offically entitled “Museum of African-American Life and Culture Program Guide”.  This magazine/newsletter was generally about twenty-five pages containing information, photographs, and sponsorship opportunities as well as at least fourty primary and reoccurring events (not including the dozens of special and sponsored programs) happening from month-to-month at the Museum for people of all ages.

Amazingly, each pristine event was an evolution of idealic modeling between collaborating and coworking people in the community embedded in mutual trust and volunterism.  From the basis of the African proverb stating “Ignorance is Expensive”, these collaborating people were able to achieve great things on the limited budget of a non-profit (Museum) and the generous donations from a believing and special few.

Most of all, these events springing from hope were rhythmic, festive, and highly informative about African American identities, reflections, and contributions.

The first black invitational rodeo sponsored by the museum was in 1987. Since that time, over 25 editions of this one-of-a-kind event has taken place with each event showcasing the deep history of African Americans and their close and organic connection to their early traditions embodied to excellence in earth, nature, livestock, and agriculture.

These staples of the broad history of African Americans and their ancestry leads us back to an empowering semblance of us reflected in these cowboys and cowgirls.  Today, these wonderful men and women compete for $25,000 dollars in prizes and provide a spectacle for all onlookers.  Click here to buy tickets.

Tulisoma Swahili for “we read”, is a community-based festival promoting literacy and the arts in the South Dallas/Fair Park area. Founded in 2003, by the late Leo V. Chaney, Jr., and Dr. Harry Robinson, President and CEO of the African American Museum, the goal of Tulisoma is to create a dynamic event tailored to engage local families, avid readers, aspiring writers and visitors to the city.

The original “Southwest Black Art Exhibition” began in 1978 and finished its 16th consecutive installment in 1994.  This art exhibition went into hiatus in 2001 after over twenty consecutive showings at the African American Museum.

The new “Southwest Black Fine Art Show” (SWBAS) began again at the African American Museum in 2010.  This new installment and latest resurgence of the previous art exhibition was a brainchild of Frank Frazier, a group of art educators, and collectors and curators from North Texas.  2019 would be the tenth installment of the show and each year SWBAS undergoes various themes and layouts to keep the show fresh for collectors and public viewing alike.

In 2018, the show saw the foot traffic of over 5,000 visitors seeking the one-of-a-kind artworks from African and African American artists from all over the globe during this four day festival. Go to swbas.aamdallas.space to view examples from 2018.